Own project’s documentation is still sparse.

There are many collected documents and publications contributed along years.

There is also a page for screenshots, as well as a youtube channel.

PDF version of English presentation without animation is available here. 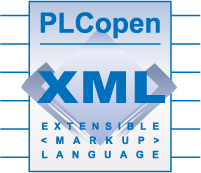 Data-model is based on the official TC6-XML XML Schema. The official .xsd file is used at startup to create a kind of meta model, that define relations between objects inside the PLCopen model. Thanks to this feature, PLCopen Editor can also be used as a PLCopen TC6-XML validator.

The IEC to C compiler

Originally started in 2002 by Mario de Sousa (U-Porto) as a ST/IL->C++ compiler for the MatPLC project, this compiler have found a new place to grow inside Beremiz. 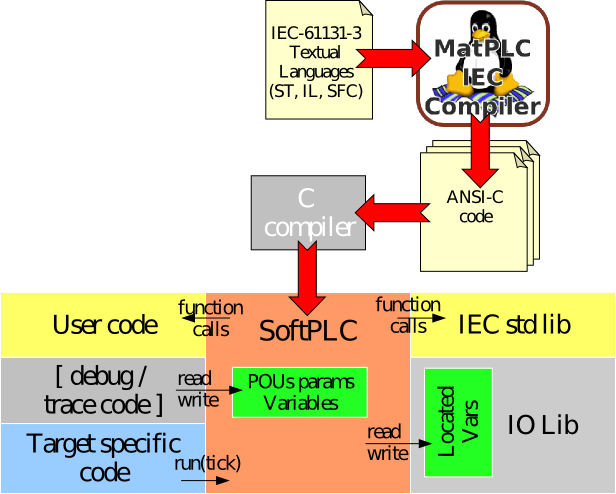 IEC-61131-3 is a normative document provided by the standards organization IEC (International Electrotechnical Commission) and describing a standard for implementing programmable controllers.

The part 3 of this document (commonly named IEC 61131-3) specifies syntax and semantics for programming language for programmable controllers. Beremiz implements all the languages described in this document.

PLCopen is a vendor and product-independent worldwide association defining international standards for various topics related to control programming. For this purpose, PLCopen has 6 technical committees.

The goal of the sixth committee (TC6) is to define a standard file format, based on XML, for exchanging programmables controllers programmed using IEC 61131-3 languages. Beremiz uses this file format for saving the PLCprograms of projects.

CANopen is a communication protocol and device profile specification for embedded systems used in automation.

CANopen is a CAN-based communication system. It comprises higher-layer protocols and profile specifications. CANopen has been developed as a standardized embedded network with highly flexible configuration capabilities. It was designed originally for motion-oriented machine control systems, such as handling systems. Today it is used in various application fields, such as medical equipment, off-road vehicles, maritime electronics, railway applications, or building automation.

The way Beremiz links IEC-61131 and CANopen is described it this paper.

Modbus is a data communications protocol originally published by Modicon (now Schneider Electric) in 1979 for use with its programmable logic controllers (PLCs). Modbus has become a de facto standard communication protocol and is now a commonly available means of connecting industrial electronic devices.

Beremiz’ Modbus client and server support relies on Modbus library for Beremiz and Matiec written by Mario de Sousa. All object types are supported, as client or server, on both TCP/IP and serial.

EtherCAT (Ethernet for Control Automation Technology) is an Ethernet-based fieldbus system invented by Beckhoff Automation. The protocol is standardized in IEC 61158 and is suitable for both hard and soft real-time computing requirements in automation technology.